Baked Farro with Mushrooms and Eggplant

The star ingredient of this dish is farro, an ancient Mediterranean grain I have come to adore. Farro has a wonderful, chewy texture and delicious nutty flavour. It has been found in ancient Egyptian tombs and is thought to have been a staple of the ancient roman’s diet. Now, it has slowly but surely been seeping into north american fine dining, and I am completely behind it. It can typically be found at natural food stores, and can of course be found online easily.

While I have been eating farro for a few years now, this was my first time baking it. About a month ago we were making a baked barley recipe, but we forgot to buy barley and thus replaced it with farro. It turned out delicious, and left me wanting more. So I decided to try my hand at making my own recipe. The liquid proportions took a lot of time to perfect, as the eggplant and mushrooms give off quite a bit of water. However, with that their wonderful flavour is baked right into the farro. This is a great, easy recipe to make on a weeknight. I hope you enjoy it!

Welcome to Cooking by Feel! 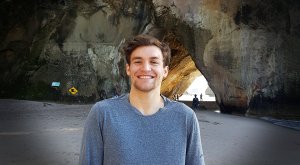 My name is Felix and I love food and sharing it with others. I write delicious, healthy recipes every week that also happen to be vegetarian. Take a look around and hopefully you’ll figure out what you will be cooking this week.